The day started badly as the lads once again had to play on pitch 8, the furthest from the clubhouse. There was grumbling from the parents as they lugged the goalposts over to the pitch, though the U-11s’ Head Groundskeeper, Alan Murphy, seemed delighted to get a chance to inspect his repairs made the previous week.

Despite having started the morning under blue skies, the Kilbogget Park microclimate soon changed to a sustained cold drizzle which set the tone for the match that followed. The Mini World Cup registration meant the parents could not even have their traditional pre-match sit-down and cup of tea!

Even manager Anthony seemed strangely distracted, as if there was another match, possibly kicking off at 1:37 the following day, that was on his mind. 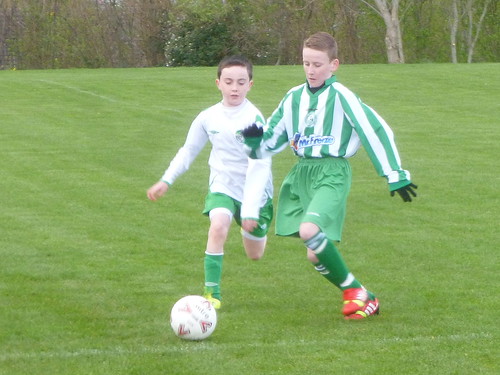 The team headed out for the game in a positive mood, with the ‘twins’ (Dara and Damien) both celebrating their birthday, Daniel looking forward to his first run-out in a midfield position and Conor sporting a fine new hairstyle.

Of the game itself, though Cabo did not play particularly badly, it was one of those days when nothing went their way. Cabo did manage to get the ball into the net twice, but it was their own goal on both occasions, which sums up the day!

And, to cap it all off, there was no match on after the U-11s, so the parents had to traipse back humping the goal posts.

At least there was some birthday cake at the end, after the traditional soaking of Damien by the team.

Manager Anthony took a philosophical view of events – “I’ll offer it all up, if only Liverpool can win tomorrow”.  We know now that his prayers were answered, so there’s some hope yet!

Looks like everyone involved with this team has a job to do!